They corral the pups into a small area on the beach reserves and then club the seal pups on the head and stab them in the heart, in front of each other and in earshot of their mothers.

The seals panic, causing mothers to abandon even those pups that the clubbers haven’t taken away from them.

This daily attack causes extreme stress for the whole colony. 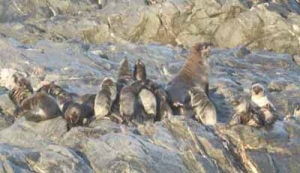 Most Namibians are aware of the tragedy of rhino poaching, but few realise that the largest slaughter of wildlife in Africa is the annual slaughter of Cape fur seals in Namibia

Cape fur seals are listed by The Convention on International Trade in Endangered Species of Wild Fauna and Flora (CITES) as a threatened species, but this designation does not protect them from being killed for economic gain.

Cape fur seals experience a natural mortality rate of about 30%. In addition, these seals have suffered several mass die-offs that have decimated the population. These die-offs are caused by a lack of prey due to climatic changes and over-fishing.

Bernard Esau, Minister of Fisheries and Marine Resources, has accused these seals of eating too many fish. In reality, this Minister is allowing Spanish fishing fleets to over-fish Namibian waters, disrupting the ocean ecosystem. Catches are not increasing even as the population of seals in Namibia’s reserves declines.

Observers from various NGO’s as well as seal scientists have been arrested or threatened with arrest for documenting the carnage.

Only by surreptitious means could video footage exposing these massacres be obtained.

The following videos were obtained by Pete Bethune and his team at Earthrace Conservation, in 2013 (left) and the Dutch NGO, Bont Voor Dieren, in 2009 (right).

Namibia’s Animal Protection Act applies to “any equine, bovine, sheep, goat, pig, fowl, ostrich, dog or cat or other domestic animal or bird, or any wild animal, wild bird or reptile which is in captivity or under the control of any person.” It prohibits animals from being “cruelly ill-treated, beaten, terrified, maimed or tortured.” It also prohibits “wanton, unreasonable and negligent” acts or omissions which result in unnecessary suffering of an animal.

The regulations stipulate that a group of pups “must be driven away from the sea and allowed to settle down before clubbing begins, care being taken to facilitate the escape of adult seals.”

“After the identified pups have settled down, they must be harvested as follows:

(a) a group of pups must be released from the group … in the direction of the sea;

(b) a clubber must kill a pup by clubbing it on the top of the head with a sealing club, when a group released in terms of paragraph (a) moves past the clubbers;

(c) the inspector overseeing the harvest must be satisfied that a pup, which has been clubbed, is dead;

(d) a sticker must pierce the heart of the pup with a knife, after the pup has been clubbed;

(4) Adult seals selected for harvesting must –

(a) be killed on land by shooting the seal with a rifle in the head so that the bullet immediately kills the seal;

(b) the inspector overseeing the harvest must be satisfied that a seal, which has been shot, is dead.”

In reality, videos and images show that these rules are not followed and live, conscious pups are stabbed. In fact, pups have been seen vomiting up their mothers’ milk when they were stabbed.

Moreover, these killing methods are not humane in an of themselves and violate the Animal Protection Act.

Many nations around the world have banned imports of products, such as fur coats, obtained from seals on moral grounds. Among these are the countries of Mexico, Taiwan, Russia, the United States, and the nations of the European Union.

In it’s submission to the World Trade Organisation, the European Union stated, “For several years, many members of the public have been concerned about the animal welfare aspects of the killing and skinning of seals and about trade occurring in products possibly derived from seals that have been killed and skinned with avoidable pain, distress and other forms of suffering, which seals, as sentient mammals, are capable of experiencing. Those concerns have therefore been expressed by members of the public out of ethical reasons.”

According to the National Planning Commission’s 2013/2014 Annual Report, “Travel and tourism has continued to be a critical sector for economic development and sustainable employment…According to the 2013 World Economic Forum report on Travel and Tourism Competitiveness, Namibia ranks 5th in Sub-Saharan Africa. However, when compared to 2011 rankings when the country was ranked 3rd, this implies that Namibia scored less in terms of competitiveness in 2013.”

One of the main reasons tourists visit Namibia is to see wildlife. According to a report entitled, “The Economics of Seal Hunting and Seal Watching in Namibia” commissioned by four NGO’s in 2011, about 10% of tourists to Namibia visited the seal reserves in 2008.

Whereas, the seal slaughter generated about NAD 6.26 Million, the seal tourism industry generated over NAD 24 Million in that year. The seals brought in this revenue despite the lack of tourist infrastructure.

While seal killing reduces the population of seals on the beach reserves, reducing the potential for revenue from seal products and seal watching alike, protection of seals on the reserves could yield far greater revenues with improved tourist facilities.

In addition, since the main countries from which Namibia’s tourists hail, South Africa, Germany, France, and the UK, have well developed internet service, travelers are becoming more and more aware of the slaughter of Cape fur seals on the reserves. They are learning about the international boycott of Namibian tourism called for by NGO’s in response to this slaughter. This is discouraging tourists from coming to Namibia.

You can help us stop this massacre.

There are many ways in which you can help Seal Protection Namibia help the seals.
Join us!

Seal pups are starving to death

We know that Cape fur seals are dying each year. Many pups are starving. Some people, especially fishermen, claim that there are too many seals. The reality is that the government is allowing fishermen to overfish. They are catching more fish than scientists say they can catch without harming the population. Besides the fish that they catch within the quota system, they are catching even more fish illegally. These fish are not even counted by the Ministry of Fisheries and Marine Resources. Is it any wonder that seal pups are starving to death? It's not only here in Namibia that seal pups are facing such problems. Here is an article about Guadalupe fur seals who are washing up on shore emaciated: Fur seal pups washing up on California shores The threats to ocean life are very serious now. Over-fishing, destructive fishing practices, pollution, climate change are all putting the ocean ecosystems that humans, seals and other marine animals depend on in jeopardy. We must all do our part. What we eat and how we make our voices heard in the political system matter.

Join us Tuesday evening, Sept. 22, 6 pm, at News Café, The Grove Mall, Windhoek. We will meet and discuss plans for putting an end to the Cape fur seal slaughter. We will also have the opportunity to chat with a special guest - a true 'Seal Warrior' - PETE BETHUNE - environmental activist from Earthrace (New Zealand)! Feel free to just show up, or contact us to let us know that you will attend the event. We look forward to meeting you! On Tuesday, about 200,000 signatures will be delivered to the speaker of the National Assembly in a petition demanding an end to the Cape fur seal massacre.

Join us in presenting a petition to the National Assembly

A petition to stop the massacre of Cape fur seals will be presented to the National Assembly the week of September 20th. The petition has been the endeavor of a number of organisations for some time. In addition, we are planning a get together for those who wish to help the seals. Please sign the petition here. Please contact us if you are available this week to meet and/or present the petition.

July 1st marks the beginning of the seal clubbing in Namibia's seal reserves. Early each morning, clubbers come out to kill the seal pups, disrupting the breeding colony, separating mothers from their pups, and creating a panic.